Here at ICAM we are following recommended protocols put in place by the CDC. Please read Dr. Bartiss’s message to patients. 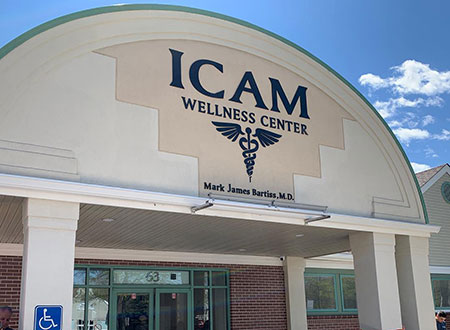 HERE AT ICAM, WE TRY TO MAKE YOUR VISIT AS COMFORTABLE AS POSSIBLE.

Our decor is bright and our atmosphere is warm and caring. Positive energy flows through every room. Our office is clean and spacious, and our staff is ready to assist you in all of your medical needs. Our drip room is furnished with the softest recliner chairs for your comfort. Dr. Bartiss and the ICAM staff are here to see to it that you are comfortable and your needs are met.

Holistic Medicine at its best! Great staff. Love Margaret, she is a sweetheart and very knowledgeable. Wish I found this practice sooner. Hopefully on the road to recovery and feeling better. I would highly recommend this alternative medicine practice to everyone. Especially, if your tired of feeling sick and tired all the time.

I have been seeing Dr. Bartiss for almost a year now. He is an excellent Dr. who really listens to his patient’s concerns. He is ” on spot” with his diagnosis and treatment! Glad I found him and his group! I would highly recommend him to anyone who is sick of their tradition doctors who just shell out drugs.

Been friendly and very professional. Dr Bartiss knows his stuff. I never feel pressured or like a number. I recently started bringing my 19 year old to ICAM for additional treatments to help out with his CHEMO treatments. I highly recommend Dr. Bartiss and his staff if you are looking for additional help outside of traditional medicine.

I’ve been a patient of Dr. Bartiss for almost 7 years now, he’s the only Dr. That recognized that I had a Thyroid condition. Thanks Dr. Bartiss for caring for me and taking an Interest in my health.

I’ve been going to Dr Bartiss for about 4-5 years now and he is a very good Dr who listens to you and works to help resolve any problems you have! I am very happy with him and his office staff who are friendly and helpful!

I tell everyone I know who is suffering but getting no relief to do themselves a favor and see Dr. Bartiss. Traditional doctors can’t see outside of the box the establishment has built around them. If you’re sick and you’ve been told there’s nothing wrong with you, do whatever it takes to see Dr. Bartiss. He’ll listen AND help you!

Outstanding care of patient and very informative info on your health.

My name is Christine and my daughter is 8. To tell you a little about my daughter FIRST she was born premature and given antibiotics which were not necessary at her birth it was all for precaution. Since 3 mos. She had what they call nurse maids elbow except not only were her elbows popping out of socket and the slightest pull, but also her knees or knee caps. Horrible to see her in pain and having to pop them back in. She has had major muscle aches and pains to the point she could not walk some days, to the common person that catches a cold and gets over it in a week not my Daughter she would be sick for weeks and it turn into the flu bronchitis strep throat crop cough and given inhaled steriods. She had a very weak immune system. I home schooled for kindergarten with a couple reasons why and this was one of them she was always sick and couldn’t risk her getting sick on top of other sick kids. So I put her in school for 1st grade she wanted to try it and missed close to 80 days because of her illness. Since the age of 5 we have seen multiple specialists pediatricians doctors massive amounts of blood work done showing red flags and WBC LOW and other levels that were off. No one could figure out what was wrong with her. So they kept giving steroids and antibiotics to mask the problem. Thinking it would work. Im totally against all this but at some point it broke me seeing my baby so sick all the time that I had to try all they said to hope and pray it would work. If you dont get to the root of the problem and fix it there you are only making and covering up the issue or problem. We heard about Dr. Mark Bartiss MD in Whiting NJ. ICAM Wellness center through a referral which was highly recommended so we said let’s give it a shot we’ve tried everything else. She has been getting 2 Hocatt ozone oxygen treatments per week now for the last couple of months along with ear oxygen which you will see in the 1 picture it’s like a stethoscope that releases the ozone into the ear canal which then gets into your sinuses which cleared her up of sinus infections and she had terrible ear infections throughout the year. Which the antibiotics could not cure.. and now is CURED. Alayna now if muscle ache free, has NOT been sick since the 2nd treatment, has her full lively energy back and no more ear aches. It’s such a shame the insurance company’s dont cover natural treatments that actually cure. So I have to thank the staff for always being so open honest and kind to us every time we are getting treatments which is weekly. When u want something bad enough you will find a way. I will post another review on my problems and treatments separately. It has helped me also and given me my life back. This man is curing ppl CHILDREN with cancer and many other life altering illnesses and diseases. I at the highest of highly recommended Dr.Bartiss for all your health care needs.. If you seek answers and a cure start here. If he cant help you he will be honest and send u on your way. He doesnt need your money. He wants you HEALTHY.

Testimonial – Paula I was diagnosed with stage III colorectal cancer December 2011. Out of fear I did six weeks of chemo and radiation. I was told that the 1-2 punch of chemo and radiation would dissolve the tumor. When that didn’t happen, I had time to think for myself. When the chemo and radiation didn’t work they wanted me to have a life changing permanent colostomy operation. From that point on I listened to my inner voice and doing that led me to alternative methods. I gave all the fear, doubt and confusion to God. He put every practitioner directly in my path. It took me 20 months for the tumor to shrink and to receive a cancer free diagnosis. I’ve been cancer free since October 2013 without having the life-changing permanent colostomy operation. Not one of the conventional doctors asked me what I did. But my alternative doctor shared my joy. Major things I did to become cancer free:  first a radical change of diet. Clean organic eating. I did Ozone ultraviolet infusion, ozone saunas, healing massages, creative visualization, received water from Lourdes grotto, healing masses, learning how to let go, acupuncture, gratitude, self-love, and lots of prayer. After the body detox the rest of the healing was spiritual, emotional and mental I give all the glory to God and I thank him every day that I listen to my Inner voice. I detailed my healing journey in the book called Guided Cure. It’s with God’s grace that the book Guided Cure has been completed. For my full story you can purchase my book on Amazon https://goo.gl/BDxp9q
Thank you for this opportunity to share the miracle I’ve received. – Paula

Testimonial – Jerry I want to thank you for your medical advice and consultation since I began ozone treatments with you for my non-Hodgkin’s’ (marginal zone) lymphoma cancer. Your MAH ozone has worked very well for me and I would like to share two areas of improvement. One concerns my bone marrow cellularity. Before I started seeing you, my bone marrow cellularity (as measured by an Oncologist prior to seeing you) was at 90% – very, very high! However, after 23 weekly MAH ozone sessions you sent me to another Oncologist. He did a bone marrow biopsy and to his amazement my cellularity had dropped to 40%! This was a great indication that the ozone was working to decrease my non-Hodgkin’s lymphoma cancer. The other measure identifying the status of my cancer is Immunoglobulin M, or IgM. Before I began seeing you an Oncologist had my IgM measured and it was at 5520 mg/dL – again, very, very, very high! (I believe the allowable maximum is around 150 to 200 mg/dL.) He wanted to start me on chemo immediately, but I refused because my extensive research revealed that chemo would poison my immune system and I did not want to go down that road. Although my IgM had gradually dropped to 3880 mg/dL, with many additional monthly MAH ozone sessions, my IgM increased to 4599 mg/dL as measured last fall and winter. During this period of time I had a seriously infected tooth and it took several months to resolve. Fortunately I eventually found the right dentist to successfully remove the tooth. Subsequently, however, you and I decided to use the combination of weekly MAH ozone plus inter-venous vitamin C. This has been a wonderful combination for me, because in less than two months my IgM dropped to 2444 mg/dL! I am totally delighted with this result and I look forward to continued weekly sessions using this combination. Although I have a ways to go, and still have this cancer, I am optimistic and sincerely believe that this combination will eventually be the solution to my problem.
I would also like to add that through my experience, I believe that alternative medicine is a very safe approach in addressing cancer and should be an acknowledged and available alternative.
Again, I want to thank you for working with me to work toward improving my situation. Thank you for what you do in working with people to help improve their lives!
Jerry